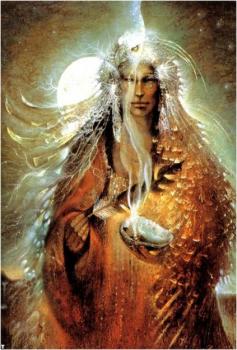 I recently completed a Level 2 Shamanic Reiki certification with Stacey “Sky” Gibbons, a Forrest Yoga teacher and Reiki master. I completed Level 1 with Stacey in October 2012. Level 2, as Stacey noted, is a much deeper attunement than the Reiki 1 attunement. But wait. What’s an attunement? A reiki attunement is given by the Reiki  master to the student. An attunement is a series of reiki hand positions, symbols, and breath techniques to transmit the energy of the reiki master, along with his or her lineage of reiki masters, to the student, empowering him or her to give the reiki treatment at that level.

Symbols are used in reiki. These symbols were said to have appeared to Dr. Usui, the founder of the system of reiki that has since been used as a platform to evolve new styles of reiki (in a nutshell, “traditional” vs. “Western” reiki). Symbols are given in level 2 that allow the practitioner to send reiki at a distance, or in other words, to perform distance healing. In the reiki system, “distance” can be interpreted as physical distance or linearly, as in time (sending reiki to events in the past, for instance).

Shamanic Reiki differs from tradition reiki in that shamanic techniques are layered on top of the reiki energy treatment to give, in my opinion, a much more complete and personal healing experience. Some of the shamanic techniques we learned and practiced during this training included shamanic journeying, the use of stones/crystals/plants or other earth elements in the reiki session, and “cutting cords,” or energetically severing ties between people.

As reiki sees “no future, no past, no present,” energetic ties to people from our past can persist to this day. Stacey even told us that women retain energetic ties to any man she has ever been intimate with. It was in this context that we performed the cord cutting ceremony, to allow the energy that woman naturally gives out to come back to her luminous field, aka her light body or energy body. Stacey taught us that feminine polarity is give/receive, symbolized by the void of her vagina/uterus, so the woman continues to draw energy, much in the way the Galactic Center continuously pulls things towards it. She compared this to the masculine polarity which is a more outward-directed/searching energy and is fed by movement, variety, and conquering. This is a blog post in itself, so let me stop here before getting carried away…

Using shamanic techniques before, during, or after reiki treatment brings added insight. Reiki moves energy in a very palpable way for those sensitive to such things. For example, during a treatment I thought for sure the person treating me had her hands on my right hip. It was not the case. She was not touching my right hip, but I felt the most heat, pressure, and sensation in that area. In other scenario, a woman receiving reiki treatment could not stop a tremor in her shoulder, even though reiki hands were not on her shoulder. Reiki students are taught that reiki energy goes where it is needed, so while hands may be on one part of the body, the energy is activated throughout the body. Shamanic techniques add another layer of insight to what is going on in the body, so a student could connect to the areas of greatest sensation and use visualization, for instance, to see his/her energy body as a transparent crystal, then look for “occlusions” in the crystal body. The seeing is done intuitively, and this is an area where Shamanic Reiki shines, for intuition is a major tool of the shaman.

On the first night of our training, after receiving the Reiki 2 symbols, I was exhausted. The same thing was reported by most of my fellow students in the training, due to having loads of energy moved in the work we did that day. On the 2nd day, we felt much revived, and the evening of day 2 I did not feel so wiped out. Stacey told us that over the next 21 days, the energy from the attunement will settle and move within us, and to be alert to changes subtle or overt. Within 24 hours of completing the training, I broke out with pimples and a cold sore! It was like my body was literally erupting and purging. Break outs are not too common for me, and I felt like this was directly tied to energy I was moving via the work. The training did help me bring to the surface a few issues that had been rattling around in my brain, which I did not know needed as much ventilation as they did, but I found out just how much I needed to release these energies by sobbing quietly throughout an entire 30 minute reiki treatment. During this experienced, I observed which hand positions caused tears to well up, and which helped them subside. Placements over the heart center definitely welled up more tears, while positions over the crown chakra helped them dissipate.

Shamanic Reiki both strengthens and reinforces intuitive power, in both the giver and receiver. Shamanism gives a new context in which to practice reiki, and the combined forces are far greater their either on its own. I will write more about my experiences working with reiki energy and shamanism as I continue learning. I am grateful to be part of this lineage of healers, which goes back to my teacher’s teacher, Llyn Roberts.